This page is meant for departmental use only. To access this page, you must identify yourself with your "@wbphed.gov.in" Email ID.

Water quality has emerged as a major issue in West Bengal despite fair achievements in coverage of rural population by safe water supply. Although all the habitations in the State are having access to drinking water, excess of arsenic, fluoride and iron poses a major threat to community health and general well being of people. The issue of water quality testing and surveillance was highlighted at the national level in 2006, when the Government of India launched the NRDWQM&SP. The programme provided a framework for the implementation of a State Level Water Quality Testing and Monitoring System.

Though the national guidelines recommended that field test kits be used for testing water samples, yet it was decided that laboratory based water testing will be adopted in the State based on the sub-district level laboratory infrastructure already available in the State. 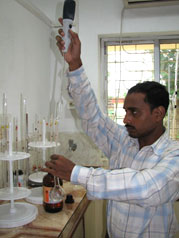 The water quality surveillance programme in West Bengal was developed with specific objectives of setting up a community based sustainable monitoring and surveillance system. About 36 PHED and 55 NGO managed laboratories were already functioning in the State to test all the public drinking water sources in the Arsenic, Fluoride and other hot spot areas only. In order to extend the facility of water testing in the entire state, a wide network of laboratories was necessary. NGOs were considered to be the most appropriate stakeholders for operating the laboratory activities and managing the infrastructures under the technical & administrative guidance of State Government and PRI. Therefore, a partnership was forged among different stake holders like Public Health Engineering Department, Panchayat and Rural Development Department, National Rural Health Mission (NRHM), the Panchayats and local Non Governmental Organizations (NGOs). About 25 more NGO managed laboratories were set up thus bringing the the total no. of laboratories to 116. Each water testing laboratory caters to about 3 Community Development Blocks with a capacity to test about 3000 water samples in a year. All the laboratories are equipped with the required laboratory equipments and glassware based on area specific water quality parameters to be tested. The laboratories are also equipped with computers and broadband facility to disseminate the test results through a web based application software developed by the State and also through IMIS developed by Ministry of Drinking Water and Sanitation, Govt. of India. Training is continuously imparted to the Chemists, Bacteriologists, and Laboratory Assistants by the leading institutes like All India Institute of Hygiene and Public Health and other eminent professionals in this field. A state referral laboratory has also been set up at Dakshin Roypur Water Treatment Plant site with all state of the art machineries and lab equipments. WHO, India has collaborated several training programmes at this referral laboratory imparting training to various participants from all over the country. In order bring the water samples from the field, facilitators have been engaged for each Gram Panchayat and trained adequately. These facilitators also play a pivotal role towards sharing of test results with the GP and the users and also help towards creating awareness about water quality in the community. The WSSO under PHED along with the help of NGOs managing the laboratory also play a responsible role towards generation of demand for testing of private water sources utilizing the services of the motivators working under the sanitation programme.

To start with, the NGOs collect list of tube wells available with the PHED and Panchayat officials at block level and update the same through field survey. Water samples are collected by the facilitators 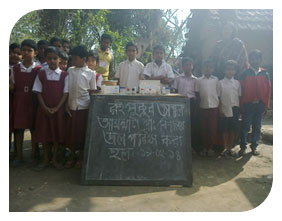 and brought to the laboratory for testing. The facilitators are also responsible to determine the LAT/ LONG of the drinking water sources with the help of hand held GPS instruments along with collection of other relevant water source data. Sanitary survey is also an important and integral part of sample collection. The protocol for water sample collection and testing follows the Standard Methodsfor Examination of Water and Wastewater (20th Edition) published by APHA. 5% of the water samples are sent to the designated referral laboratory of PHED. All the test results are fed in to the web based application software developed by the State and also into the IMIS.

Testing of Water Samples through Field Test Kits (FTK) is also a major activity of the NGO network. Appropriate training has been provided to the water sample collectors in testing water samples. The community is involved while using the FTKs and the importance of water testing and linkage of water quality and health is disseminated through appropriate IEC. Strategic places like Schools, Anganwadis, Market Places are the primary focus of water testing through FTKs.

All the 116 laboratories are monitored at various levels right from GP to State. However, Executive Engineer PHED of the district is nodal officer of all the Water Testing Laboratories under the district. At the Zilla Parishad there is district Water and Sanitaion Co-ordinator who maintains the link between the labs and the Gram Panchayat. At the state level a separate State Level Monitoring & Support Unit has been setup where there is team of qualified Laboratory Co-ordinators, Consultants and System Manager who continuously move around the state to check the quality of work and provide hand holding support. Under this Support Unit a Call Centre has been established which is a single window complaint registration and redressal unit. At the State Level there is committee on National Rural Drinking Water Quality Monitoring & Surveillance Programme chaired by the Engineer-in-Chief & Ex-officio Secretary PHED with members from different organizations and institutions, where all policy decisions are taken.

In order to cope up with the huge expenditure involved in the process, an attempt has been made to mobilize fund from different sources. Expenditure towards honorarium of the laboratory personnel, payment of fee to the facilitators for collection of water samples is being borne by concerned Zilla Parishad out of the fund available under Finance Commission. Necessary funds for procurement of chemicals for the laboratories are being provided by the Health & Family Welfare Department. Setting up of new laboratories, up gradation of existing laboratories, procurement and distribution of chemicals and glassware is undertaken by PHED. Honorarium of laboratory personnel has been arrived in such a manner that he earns his salary by testing a certain no. of samples in a month, multiplied by a fixed rate of testing per sample (Rs. 70/-sample). However, a fixed honorarium is presently given to the lab personnel compensating the shortfall, if any, by the Zilla Parishad. Similarly, facilitators are also paid on per water sample collection basis with a varying rate (Rs. 25/- to Rs. 55/-) depending upon the distance covered. There is also a provision for collection of water testing charges at the rate of Re. 1.00 per family which will ultimately meet up the annual requirement of fund towards salary of lab personnel and sample collector.

Based on the above decentralized water quality monitoring system the State Government has already tested about 1,32,262 drinking water sources in 79 blocks of 8 districts. All water quality related data has been fed into a map in GIS platform prepared by Department of Science & Technology. The maps showing the distribution of tube wells along with other information like location, depth of the tubewell, year of sinking, arsenic content etc. have been shared with all the stake holders which helped in planning for alternate safe water supply in affected areas. The Master Plan for Arsenic Mitigation which is presently under implementation by PHED is also the outcome of the above water quality survey.

Similarly, about 52,000 water samples have been already been tested in 43 fluoride affected blocks of 7 districts. The mapping of fluoride contamination has also been completed and the Master Plan for Fluoride Mitigation has also been prepared based on these maps.

Apart from the above specific projects in Arsenic and Fluoride affected areas a routine water quality testing is being done throughout the state.

Remedial measures against bacteriological contamination are directly being taken up locally with the help of the Panchayat or PHED by proper disinfection followed by awareness generation if the situation demands.